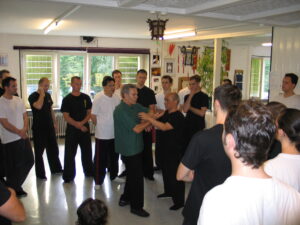 “WE DON’T WANT to CONVERT PEOPLE to OUR WING CHUN.
All we want is to MAKE this tradition ACCESIBLE to EVERYONE in EUROPE.”
(Wilhelm Blech)

Wilhelm Blech was born in 1952. Since the age of 16, he decided to challenge himself with different forms of fighting disciplines such as Boxing(), Tang Shou Dau, Tang Lang, and Tae Kwon Do and it’s unquestionable that his immense curiosity, headstrong ambition and physical propensity to training drove his passion further and further. However, there is only 1 milestone that truly defined the future and purpose of Wilhelm Blech’s life: the meeting with his, soon to be Sifu, Master Lok Yiu. Always in search of perfection and of answers that could placate his desire to look for the truth in Wing Chun kung fu, in 1992, he decided to go to Hong Kong, taking with him 3 of his oldest students. The journey was expensive and uncertain since neither Wilhelm Blech nor his pupils had any idea if and how such a prominent representative of the Chinese Wing Chun tradition, the oldest alive direct disciple of the Great Master Yip Man, would ever even consider the idea of offering up his time to some foreign strangers. Yet, Wilhelm Blech’s obstinate determination was absolute. 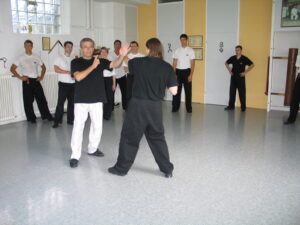 At all costs, he wanted to measure what he had previously learned against the man who has been detaining such an exclusive understanding of the true nature of Wing Chun. Great surprise and astonished incredulity hit the journeying party when they were welcomed by the Lok Yiu family’s natural affability. All questions were answered with no rigid pride; space and time were given to those who wanted to show what they have been learning in Europe about Wing Chun. Master Lok Yiu himself didn’t spare any compliment. The atmosphere was uninformal and appreciative but only after Lok Yiu rose from his seat to make a demonstration of his Wing Chun, Wilhelm Blech understood why: nothing could ever be feared by those who retained such an impressive, unique, fluid, efficient, and almost unbelievable style of Wing Chun. No confrontation could have ever threatened them. At that point, Wilhelm Blech knew that he had found his life purpose. He would have earned the Lok Yiu family’s sincere and deep trust and would bring back to Europe their own Wing Chun style, protecting with his own name the 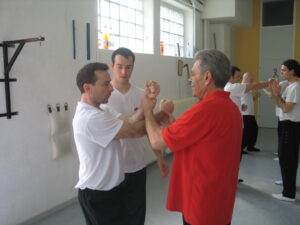 traditions and standards set by Lok Yiu himself while teaching everyone, who was eager to learn, what, for him, has become the only true Wing Chun. In 1992 Wilhelm Blech officially founded the ELYWCIMAA with the blessing of Lok Yiu. Every person who enters this great organization knows that they will learn Wing Chun as the authentic style of the Great Master Yip Man.

This website uses cookies to improve your experience while you navigate through the website. Out of these cookies, the cookies that are categorized as necessary are stored on your browser as they are essential for the working of basic functionalities of the website. We also use third-party cookies that help us analyze and understand how you use this website. These cookies will be stored in your browser only with your consent. You also have the option to opt-out of these cookies. But opting out of some of these cookies may have an effect on your browsing experience.
Necessary Always Enabled
Necessary cookies are absolutely essential for the website to function properly. This category only includes cookies that ensures basic functionalities and security features of the website. These cookies do not store any personal information.
Non-necessary
Any cookies that may not be particularly necessary for the website to function and is used specifically to collect user personal data via analytics, ads, other embedded contents are termed as non-necessary cookies. It is mandatory to procure user consent prior to running these cookies on your website.
SAVE & ACCEPT