was born in April 1957, on the same day as his younger brother. When he was a child he liked watching his father’s To-Dais training. After entering the world of Wing Chun, though, he realized how much work it required. In time, training by training, challenge by challenge, the Wing Chun became an essential part of his life too. When Wilhelm Blech, former President of the ELYWCIMAA, became Lok Yiu’s To-Dai, a great friendship and brotherhood grew between them and the many European students that followed his steps to Hong Kong. 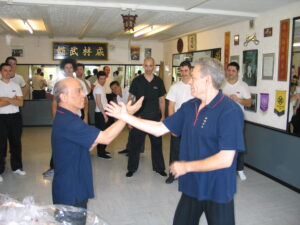